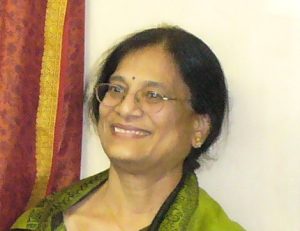 If you are interested, please send an email to ksinghal@ieee.org.

My class notes and slides are at KumudSanskritClassNotesOctober5.pdf

To my students:
This document is 216 pages long. I have included many examples on each topic, number of them are from Bhagavad Gita and prayers we chant. My favorite section is of short stories. There are 45 such stories. Hope this document will aid in your Sanskrit studies. I will greatly appreciate your comments and suggestions and also if you find any typographical errors. The revisions will be mostly to fix these errors. The latest version will be available on this site.

The language Sanskrit has immense significance in our tradition. Starting from the Vedas, which form the bedrock of our culture and civilization, it has been the primary vehicle for the expression of ideas, knowledge etc. through the ages. Thus an understanding of Sanskrit language is the key to unlocking the treasures that lay buried in our scriptures. “वेदस्य मुखं व्याकरणम्” – व्याकरणम् (grammar) is the face of the वेद-पुरुष:. Learning Sanskrit grammar is the best bet for us to be able to read, understand and appreciate the original works of our tradition, be it the रामायणम् of the sage वाल्मीकि: (VAlmiki) or the works of आद्य-शङ्कराचार्य: (Adi ShankarAchArya).

The grammar of Sanskrit language has been originally composed by three sages – मुनित्रयम्. The first and foremost of these three is पाणिनि:  (pANini). His Magnum Opus अष्टाध्यायी (group of eight chapters) is the primary source book of the grammatical tradition. There were other grammatical systems before and after that of पाणिनि:, but his work has gained such universal acceptance that it has completely obscured the others.

The अष्टाध्यायी is in the form of terse rules or aphorisms (called सूत्राणि). It is written in the form of an algorithm, and aims at explaining the derivation of all the usages in the writings of established scholars of the language. It contains close to 4000 short rules, in a form that can be easily memorized by an eager student of the language. The other two important grammarians are कात्यायन: (the author of the वार्त्तिकानि – rules supplementary to the अष्टाध्यायी) and पतञ्जलि: (author of the महाभाष्यम् – the great commentary on the अष्टाध्यायी). They use the अष्टाध्यायी as their source material, but also add more explanations to elucidate the rules and in some places, to explain any usage that has been left unexplained by the work of पाणिनि:।

With these three grammarians, the grammatical tradition is more or less complete. However, there are also very important grammar works after them, which form an invaluable companion for the modern reader. The काशिका-वृत्ति:, for instance, is a gloss on the अष्टाध्यायी with carefully chosen examples. Another important relatively recent work is the सिद्धान्त-कौमुदी, which rearranges the rules according to derivational topics. The importance of सिद्धान्त-कौमुदी cannot be overstated, as most modern grammars of the Sanskrit language are eventually derived from this work.

संस्कृतम् is derived from the past participle of the root कृ, to do, with the prefix सम्, well. The word thus means “that which is well done”. The uniqueness of the language is that it uses 2200 verbal roots (धातु), to generate an entire vocabulary of millions of words. The words are formed from these roots by the addition of prefixes and suffixes (affixes प्रत्यय) according to well-defined rules. संस्कृतम् is phonetically precise, that is, every sound is represented by a unique symbol. When two sounds come together in संस्कृतम्, they combine with one another according to well–defined set of rules called euphonic combination, or सन्धि rules.

संस्कृतम् is a phonetically precise language. Each sound is precisely defined in terms of the point where the sound is articulated, and the type of effort needed to pronounce the letter.

k to Panini’s अष्टाध्यायी, one of the main features that has aided पाणिनि: in keeping the rules short has been the माहेश्वर–सूत्राणि. These are fourteen aphorisms, which do not belong to the अष्टाध्यायी per se, but yet, play an important part in it. The माहेश्वर-सूत्राणि are said to have been revealed by महेश्वर: (Lord Shiva) Himself, which is what gives them their name. महेश्वराद् आगतानि – माहेश्वराणि सूत्राणि। Like most things in Sanskrit, the grammar has roots tracing back to a divine origin. The mythological story of the 7 great seers, the Saptarisi, describes how they went to Lord Shiva seeking the essence of language. Lord Shiva played his drum, a damaru, and from it came sounds that are known as the MAheshvara-sUtrANi. These sounds were 14 sutras that became the basis of Sanskrit grammar as recorded by Panini.

Panini has based his entire grammatical work on these sutras. To avoid detailed recital of the letters, he used what is called the प्रत्याहार (pratyAhAra). It is very much what you say you would see advertised in a shop window “A-Z available here”. Rather than list what he has, the shopkeeper, in his A-Z, has conveyed the fact that he stores all that you need.

Similarly, when Panini wished to list only the स्वराः (vowels), he just said अच् and no more. Look at the sutras again. Which sutra has the अ? The first. Which sutra ends in च्? The fourth. Ignore every alphabet with a विराम (nether stroke). They are called the “इत्” letters and are only indicatory letters which disappear the minute  the purpose of indication has been fulfilled. List all the letters that are in the four sutras and you have a list of all the vowels. The प्रत्याहार  “हल्”  includes all the consonants. The sound ह occurs twice in the सूत्राणि, once in the fifth सूत्रम् and again in the last सूत्रम्. However, the हल्-प्रत्याहारः is always counted from the first ह, making the name हल् stand for all consonants. This is obviously so, because otherwise the हल्-प्रत्याहारः would refer to the single letter ह् and serve no purpose. Panini has worked on 41 such प्रत्याहार in his अष्टाध्यायी।